The Indian Landscape from Empire to Freedom 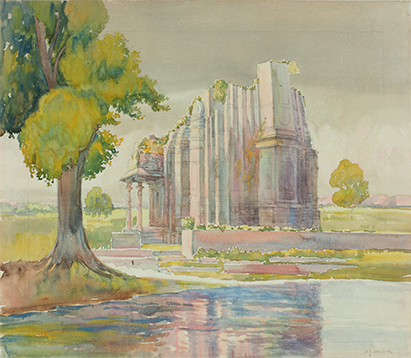 We might think of landscape as the most obvious and natural subject for painting. What could be simpler than an artistic response to the world of nature? And yet, civilisations have not always produced landscape paintings. Landscape as an independent genre – with the primary focus not on action but on scenery – was first championed by the Chinese in the 9th century. It was introduced into English art only in the 18th century. Elements of nature have appeared in Indian art since the murals of Ajanta, but in supporting roles, in images that are primarily sacred or courtly. Pure landscape painting arose in India only in the 19th century, in response to colonial practice. This exhibition looks at landscape painting in India over a period of two hundred years, from 1780 to 1980. We start with English artists who travelled in India from the late 18th century onwards, to rediscover what they were looking for, and how they saw what they found. The introduction of new materials, and the teaching of new methods in the art schools from the middle of the 19th century, encouraged some Indian artists to adopt similar approaches. While mastering an academic style, they learned to view their country in part through Western eyes. Later, in the 20th century, a reaction set in, as Indian artists sought new modes of expression. As if reclaiming their patrimony and the right to represent it, they invented a glorious array of new landscape styles.

The visual story that this exhibition unfolds goes from an imposed colonial gaze, through Indian accommodation and adjustment, to rejection, and the profusion of new forms of imagery, rooted in the land. The parallel with the course of the freedom movement is no coincidence, as artists react to the conditions and events of their times. Landscape artists are acutely alert not only to time but to space, finding ever new ways to depict the land on which they stand, even as the control of it is reclaimed.

The Picturesque Landscape
The English aesthetic of the picturesque developed in the late 18th century. The first artists to bring this ideal to India were William Hodges, along with Thomas and William Daniell. The picturesque also pervadess the work of many talented amateurs, including army officers and employees of the East India Company. It is a vision of landscape that accentuates antiquity and ruin, and which presents buildings not as distinct entities but as integral parts of the scenery. This, and the absence of all but a few token people, creates an impression of a place full beauty but devoid of human purpose.

The Naturalistic Landscape
In the 1850s, the colonial government established art schools in Calcutta, Madras and Bombay, where draughtsmanship was central to the curriculum. The Bombay School especially promoted a Western academic approach, and trained the first great Indian artists to produce pure landscapes in a naturalistic genre. These include Pestonji Bomanji, M. V. Dhurandhar, and many others. In Calcutta, some graduates from the Government College of Art and Craft also championed naturalism, like the pioneer printmaker Mukul Dey and miniature format artist Bireswar Sen. Even some artists mentored by Nandalal Bose favoured naturalism, and others followed in their footsteps. For some, the naturalistic landscape was a lifelong pursuit, while for others – likes Sunil Das – it was an early stage of their artistic development.

The Free Landscape
With landscape painting well established, some artists began to question the need for realism in the genre. Naturalism seemed to them too literal, and dependent on alien academic conventions. Why should landscape not be treated like any other subject: not as a form to imitate, but as a source of inspiration while creating new forms? In part these artists were responding to global developments such as Expressionism and Abstraction, in part they were asserting a self-given right to greater freedom to experiment.
The artists represented in this section were all born between 1900 and 1947, in what was still a colonial state, and they all lived to see it achieve Independence. The earliest works included date from around that moment, and we follow the story up until 1980, two hundred years after the arrival of William Hodges, by which timed their vision had firmly supplanted his.