Sebastian Cortés’ series, Sidhpur: Time Present Time Past forms the first in-depth photographic exploration of the Bohra Islamic community in Sidhpur, a little-known small town in Gujarat. Chancing upon Sidhpur while on assignment, Cortés was intrigued by its rich heritage and distinctive vernacular architecture. Building on from the ideas explored in his previous book Pondicherry, this latest exhibition demonstrates Cortés’ continuing interest in documenting and uncovering India’s more enigmatic facets, this time through careful photographic studies of the traditional habitats and domestic spaces of the Dawoodi Bohras, an elusive and veiled Islamic community.

Traditionally a trading community by profession – indeed, the term Bohra derives from the Gujarati term ‘vehru’ or trade – the Bohra’s are a people who constantly invented and reinvented their identity in keeping with migratory patterns. Absorbing and negotiating influences around them, their complex cultural makeup is strikingly reflected in their entirely unique architecture that is an amalgamation of Hindu, Islamic, Persian, European and Colonial styles.

Cortés’ approach is to “take time to unveil small narratives”, and continually highlight photography’s ability to capture, expose and visually interpret lingering moods and inherent natures contained within domestic architectural spaces. The photographs in this series are saturated with fragments of what was once valued, of past luxuries and prizes, that despite neglect resist decay and refuse to be entirely dismissed. He captures the residual memories, histories and traces of past lives that persist in the facades of buildings, in empty rooms, windows, doors, stairways, and other distinguishing features of Bohra architecture. Through doing this Cortés’ images allude to the past contained within the present; functioning as an exploratory exercise in biography, metaphor and geography, themes constant in his work.

“The inhabitants of most of the homes seem to have a rather distant relationship with the homes and the content...Few could really give me any clear explanation or offer details about the architecture or the detailing... Efforts to share glimpses of their rich heritage were limited to showing me a few old photographs of important family members or reacting to the questions I would pose,” recalls Cortés. In many ways, therefore, this series is both a comment on the slow dissolution of a culture and an exercise in preservation, a record of ‘the remains of the day’.

Internationally recognized as a lifestyle and fashion photographer, Cortés has always maintained a firm commitment to fine art photography. Influenced by the American New Topographics in the tradition of Stephen Shore, William Eggleston, and Fox Talbot’s astute observation of the camera’s special aptitude for recording the injuries of time, he has developed a highly personal analysis of the camera as an instrument for recording the layering of time and sense of place. This is clearly illustrated in the photographs exhibited here, which resonate with a sense of loss, ruin and decay, a melancholy that is tied to the recognition of the simultaneity of Time Present and Time Past. 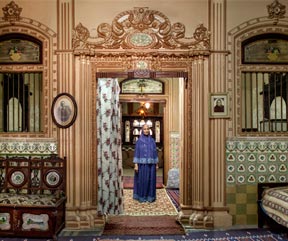 
Join us as artist Sebastian Cortes discusses his work with art critic and writer Rosalyn D'Mello.
Open to all.