POI/ भारत के लोग (POI standing in for People of India with a delicious vernacular sound to it – poi like oi) was artist Archana Hande’s response to the Museum exhibition The Doubled Frame: Interrogating Identity, in the Kamalnayan Bajaj Special Exhibitions Gallery. The latter exhibition drew from the Museum’s collection of rare books, photographs, paintings and prints to essay a reading of how an Indian identity was constructed in the 18th, 19th and early 20th centuries by the British.

Using the Museum collection as the frame of reference Hande created a topography of images both contemporary and historic that emerged like ghosts and disappeared in a shroud that was actually a mosquito net, ephemera from the past seeking to inhabit a tangible form in the here and now.

The artist spoke of her interest in the idea of how identity has no origin and is a constantly shifting ontological construction that changes with each passing moment. However she explained that the human need for security and certainty prevails and we are co-opted into believing that which others wish us to believe. The issue of what is authentic, what is pure and original as a cultural construction is questionable and difficult to substantiate as the very act of practice in the present mediates and changes the original.

Hande used the idea of a mosquito net, a British import now used ubiquitously in India, as the protective layer which encloses the ephemeral images of the hundreds of types of people which she sourced both from her own personal collection and from the Museum. She spoke of a semiotics of identity, signifiers which become codes of connection or disharmony. “This language is performed through a documentary practice which transforms the original idea in its very practice,” she says. 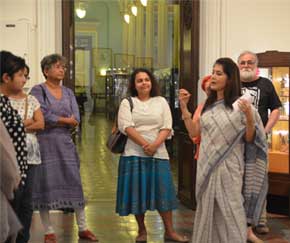 Walkthrough with Artist and Curator

Artist Archana Hande & Curator Tasneem Zakaria Mehta conducted a public walk-through of the exhibition, reflecting on the issues of the representation of identity.
Saturday, October 18, 2014 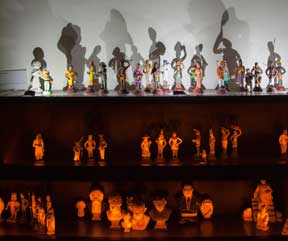 Free, open to all tours of the exhibition in English, Hindi and Marathi were conducted by the Museum’s curatorial team every Sunday from September 19 – October 26, 2014. 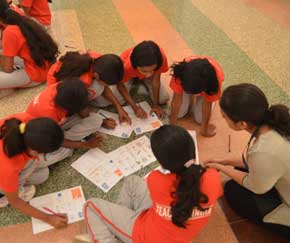 This workshop encouraged an exploration of the ways in which the people of India were documented in the 18th, 19th and 20th centuries. Then turning their gaze to contemporary, urban Mumbai and recalling the popular People of India charts, participants aged 8 and above, drew, decorated and documented the people of the city as they see and encounter them today. Who are Mumbai’s people, and what are their occupations in the 21st century? Who would you show - a movie star, bus conductor, cricketer, dabbawalla or doctor? How would they dress and what props would they hold?
An open to public session of this workshop was conducted on Sunday, October 12, 2014.