Explore the Museum with the
curatorial team every weekend.
Time: Saturday and Sunday
11:30 am English Tour
12:30 pm Hindi/Marathi Tour
Open to all.
Museum ticket applicable.
Closed on Wednesdays.
Note: The weekend public tours are currently suspended due to Covid-19. 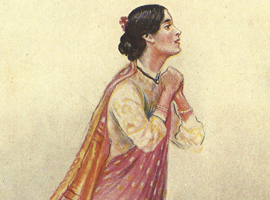 Mahadev Vishwanath Dhurandhar (1867 - 1944) was witness to the accelerated change that was taking place in colonial India. His sharp observational skills and deep-rooted cultural sensibilities led to the creation of a humanist and humorous documentation of the era. His works are a unique depiction of life in India, defined by an indigenous perspective with a visual vocabulary that is unique and captures the authenticity of the material and style.

Dhurandhar was trained at Sir J.J. School of Art in Bombay and eventually became headmaster. His proficiency in European naturalism won him numerous awards. Like most artists of the time, he attempted to negotiate his way through colonial aesthetic standards and pry out new expressive methods (Sawant, 104). He is now known for his ability to represent timeless divinities within a “historicizing, naturalist still frame” and his “re-indigenized Indian naturalism” in response to Western ideals (Jain, 145). Renowned art historian Partha Mitter points out that in the late nineteenth and early twentieth century, the figure of the artist as a romantic outsider was an established convention in the modernist imagination (Mitter, 86). Dhurandar's practice breaks away from this notion. His works, often read as testaments of the time, remain faithful to the academic realist style. This exhibition attempts to explore a range of practices, themes and ideas touched upon by Dhurandhar in the illustrious life of this most experimental artist.

Unlike his contemporaries, Dhurandhar's illustrations reflect a penetrating world view. His works were not merely documentary in nature but poised as theatrical realism. Mumbai (formerly Bombay) had a flourishing Marathi and Parsi theatre industry as well as studio photography in the early 20th century. Dhurandhar had close associations with Balgandharva, one of the renowned theatre performers who often visited Dhurandhar's studio. (Dhurandhar, 43). The influence of theatre is evident in the striking poses and emotive faces of the figures in this series. It is this very lifelike quality of his paintings that make these illustrations more than mere scientific studies.

The exhibition tries to offer glimpses of Dhurandhar as a chronicler of the changing times in the bustling metropolis as well as his tenacious dedication to traditions, morals and most importantly, his art. In his biography Kalamandiratil ekkechalis varshe (41 years at Sir J.J.School of Art) while addressing young artists he says…

“To achieve success in this field should maintain purity of character and they should practice their art with a sense of reverence; this alone will raise their art to new heights”.

Dhurhandhar became a master of academic realism style but in his personal life, he was deeply traditional. He remained true to his practice and revered his alma mater as a 'Temple', which reflects his personality as a modernist paradox!