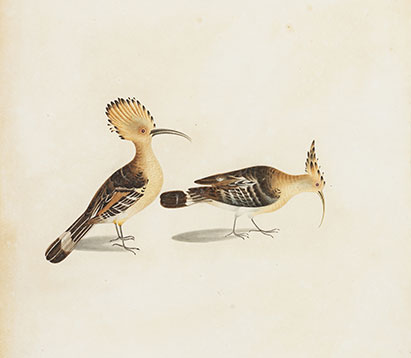 Works of art made by Indian artists for Western patrons in the early colonial period are what we now call Company Painting. The artists, who might otherwise have worked for an Indian court, sought new markets among those employed in various capacities by the European trading companies, and especially the British East India Company. Some patrons supplied the artists with new materials such as European-made paper and transparent watercolour pigments, and expressed preferences regarding subject matter, leading to new departures in both style and substance in Indian art. One of the most delightful genres of Company painting was Natural History: images of India’s plants, animals and birds.

The core of this exhibition is an album of 99 paintings of birds, painted by unknown hands, in Bengal around 1800. Sadly we do not know the names of the artists, or even that of the original collector, though the flyleaf has notes indicating that for a long period the album belonged to a family called Cunninghame Graham. The birds depicted include raptors, game birds, coastal waders and many woodland and forest birds, some very familiar and several that are now scarce.

The group from the Cunninghame Graham album is supplemented by three smaller sets dating from between 1810 and 1835. Eight folios painted in Kolkata around 1810 are among the finest works on natural history produced in India. Fourteen are from the Faber Album, dated to c. 1830, and the final four are by a named artist – Chuni Lal of Patna – and come from the Inge album of c. 1835. Together the four groups illustrate the development of Company painting in a single genre. The artists capture not just the appearance but the character of the birds, and the images will surely appeal to lovers of nature as well as of art.