Between Art Deco and Modernism

Since the late 19th – early 20th century, poster design has been recognised in the Polish artistic tradition as a source of national pride. In its early stages, posters executed in Poland and in surrounding countries were very similar and comparable in form. During the 1920s, when the poster was becoming defined as an independent art form, an interest in folk art patterns emerged and later, this use of native folklore as a source of innovation served to form a Polish national style.

Poster design was considered a driving force of artistic progress as it brought together architecture, painting and sculpture with artistic design. Artists were not limited to the creation of unique pieces, they were also able to use mass production to present common symbols and aesthetics of the times into their work. It was precisely this ability to blend both the new and the existing that brought Polish artists to a level of international recognition for their modern stylisation and interpretation of folklore at the Paris Exposition of Decorative Art in 1925.

In addition to the conservative trends represented by references to folk art, a modernistic orientation, open to impulses from the outside, also appeared and was best expressed by students at the Warsaw Polytechnic Institute. The high awards received by them were recognition of the unique qualities of Polish posters as being highly conceptual, with rationality and clarity of composition. It was this harmonious synthesis of traditionalism and modernism that best defined Polish poster art in the period between the wars. Towards the end of this period, a distinct ‘Polish’ style emerged. Its aesthetics were not described by any one norm. Instead, it was a mosaic of individual ideas and inquiries, using different mediums, which strongly emphasised the individuality of the artists.

Mariusz Knorowski
Chief Curator of the Poster Museum at Wilanów 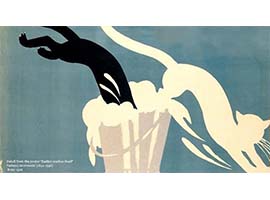 Free Workshop | Design at the Museum


Join us for a tour and workshop inspired by our new exhibition 'Between Art Deco and Modernism: Polish Posters from 1918-1939’ with Mumbai-based graphic designer, Mohini Mukherjee. Explore the history of Polish Poster design between the World Wars and make your very own poster to take home!

Mohini Mukherjee is a self-taught designer and artist based in Bombay. She curates for artist platform Kulture Shop and manages their roster of a hundred graphic artists. Her work specialises in typography and illustration, drawing on common visual tropes and motifs.

Age group: Open to all over 15 years of age. Adults can participate too.