The Surface of Things: Photography in Process

The experimentation with a light sensitive surface eventually led Joseph Nicephore Niepce (1765-1833), inventor of the first photograph- a heliograph - to create a copy-image of a view through his window in Le Gras in 1826. Almost 200 years hence, to usher a festival of photography during Bonjour India 2017-18, this exhibition invokes the birth of an analogue visual form through a process-oriented exhibit, featuring the works of 4 contemporary artists - Uzma Mohsin, Srinivas Kuruganti, Sukanya Ghosh and Edson Dias.

The exhibition invites readings on the process of image making, suggesting the medium’s potential to equate socio-historical concerns with personal positions at a time when the daily production of images through social media has reached an unprecedented scale – marking the birth of a new maker as well as an ever-growing audience.

About the Artist:
Jagannath completed his BFA from B K College of Art & Craft, Bhubaneshwar in 1991 and MFA from M S University, Baroda in 1994. He was a visiting researcher at Fukuoka University of Education, Fukuoka, Japan in 1997 as well as a recipient of the Lalit Kala Akademi Research Fellowship, Orissa State Lalit Kala Akademi Scholarship, and Junior Research Fellowship, Government of India. He completed MFA in Sculpture from Royal College of Arts London in 2002. He has received several awards such as the Centre Prize, C.I.I.C London, All India Fine Arts and Crafts Society award, New Delhi, Alice Boner Memorial award, All India Drawing Award from Punjab Lalit Kala Akademi and Orissa State Lalit Kala Akedemi. He has participated in the Khoj International Residency, Delhi and International City des’Art, Paris. Panda has had multiple solo shows since 1998; in Tokyo, Mumbai, New Delhi, London, Berlin and San Francisco, in addition to numerous national and international group shows. He was part of a community project in 2014, ‘We Are Here For A Reason’; a community based art project at Barbil, Odisha. He was also involved with collaborative projects such as the Lime Tree Grove project in 2001, and the Spirit of Ground in 1998. Panda’s works are in several collections such as the GVK Mumbai International Airport, Mori Art museum, Fukuoka, Lalit Kala Akademi, National Gallery of Modern Art, New Delhi, and Hindustan Times, New Delhi, and the International Centre for Genetic Engineering and Biotechnology, New Delhi. The Artist lives and works in Delhi. 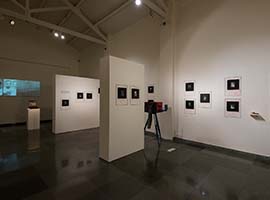 
Join us this Saturday for a special free tour of our ongoing special exhibition 'The Surface of Things' by featured artists Srinivas Kuruganti and Sukanya Ghosh in addition to our regular weekend tours of the Museum! 'The Surface of Things' invokes the birth of an analogue visual form through a process-oriented exhibit, featuring the works of 4 contemporary artists – Uzma Mohsin, Srinivas Kuruganti, Sukanya Ghosh and Edson Dias.

Lang: Marathi and English
Charges: Museum entry ticket applicable
Open for all. No prior registrations required.