Vintage Photographs of the Golden Age of Hindi Cinema,
Curated by Ram Rahman

The exhibition presents vintage photograph portraits by J.H. Thakker, founder of the iconic India Photo Studio, Mumbai. Jethalal H. Thakker (1923 - 2003) came to Mumbai (Bombay) as a partition refugee from Karachi in 1947, his father having moved the family from Quetta after the great earthquake. Thakker had apprenticed at a photo studio in Karachi before setting up his own studio there. Moving to Bombay during partition, he set up the India Photo Studio in Dadar next to the Chitra Cinema.

Thakker became known for his moody portraits of film actors of 1950s and 1960s Hindi cinema. He developed a signature style of dramatic lighting with spotlights, shadow textured backgrounds and studio props and costumes. Displayed through these unique, vintage silver-gelatin prints, this style is unmatched even in the studio portrait tradition of Hollywood or the other film cultures in India – Madras, Hyderabad and Calcutta. Thakker’s portrait work is doubly significant- as a fine example of the studio photography tradition in India, and also as it created the public image of the Bombay film industry in its golden period in the decade after independence.

Through this exhibition, many of the photographs Thakker created on the sets in the film studios will be on display for the first time. These pictures are terrific records of how films were created in studio sets in the days before digital rendering and manipulation.

This is a rare chance to see a little-known history of both photography and cinema, and to connect with an important part of the popular cultural history of the city of Mumbai, which became a crucial part of our national identity. 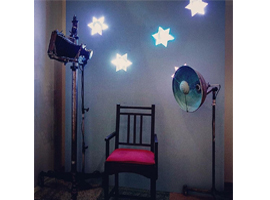 Participate in 'Silver Magic Photo Studio' and be a star on our social media!


Click a picture of yourself in the chair, mail us and get featured on our social media page.

This activity is a part of the temporary exhibition 'Silver Magic: Vintage Photographs of the Golden Age of Hindi Cinema, Portraits by J.H. Thakker' on view at the Museum till 29th Feb. 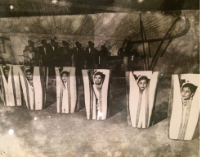