Explore the Museum with the
curatorial team every weekend.
Time: Saturday and Sunday
11:30 am English Tour
12:30 pm Hindi/Marathi Tour
Open to all.
Museum ticket applicable.
Closed on Wednesdays.
Note: The weekend public tours are currently suspended due to Covid-19.

A History of U.S. – India Relations: 1790-1947
In collaboration with The United States Consulate General, Mumbai

Composed of unique photographs, documents and ephemera, the exhibition highlights historically compelling interactions between Americans and Indians from the late 18th century till India gained its independence in 1947, and features early commerce,cultural and philosophical connections, leadership exchanges,World War II, and more.

Kindred Nations presents historical images that recall tales of remarkable people, some well known, others awaiting rediscovery. These stories convey the range of Indo- U.S. interactions across many domains.The exhibition will feature major historical events, but also incorporate little-known moments that reflect the relationship between the two countries. 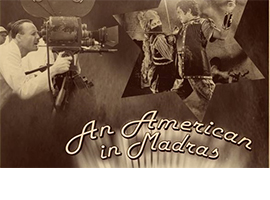 Film Screening | An American in Madras

‘An American in Madras’ traces American-born filmmaker Ellis R. Dungan’s years in India. Born in 1909 and hailing from Barton, Ohio, Dungan reached the shores of India on February 25th, 1935 intending to stay for 6 months but ended up staying for 15 years! During this period, he brought many technical innovations to the developing Tamil Film Industry of the 1930s and ‘40s, and infused a sense of professionalism into its filmmaking. All this, without understanding the language!

Dungan directed the great Tamil superstar MGR's first film, Sathi Leelavathi, as well as famed Carnatic vocalist MS Subbulakshmi's most famous films, Sakuntalai and Meera. The film traces Dungan's Indian connection right up to 1994, when on a trip to India, the Tamil Film Industry felicitated him in Chennai for his contribution to its development, a good 43 years after he had left India.

Karan Bali, the director of the film will be in conversation with filmmaker Batul Mukhtiar and the audience after the film.


Free and Open to All